Kulture Komix is a collection of creative content from the counter culture! Featuring dungeon quests, space sagas, comic parodies, funny animals, robot rascals, dire dreams, and psychedelic voyages! A fantastic trip for comic book fans! 100 Big Pages! This is available in print at Lulu, in digital and print at Indy Planet, plus for download at Drive Thru Comics, as well as part of the Underground Comics Collection Bundle.
Posted by Jer Alford at 3:12 PM

Kooba Komix shows were it all began in Begin Game. Fox Feature Syndicate helped start the concept of heroes in comics during the Golden Age. This collection features: Stardust the Super Wizard, Jungle Lil, Sub Saunders, Yank Wilson, Jo-Jo the Congo King, Captain Kidd, Space Smith, Dagar the Desert Hawk, Rocket Kelly, plus Black Fury and Chuck! 100 Big Pages, and in color! You can get this in paperback now at Lulu, plus for download at Drive Thru Comics, and as part of the Kooba Komix Collection.
Posted by Jer Alford at 11:19 PM

Pussy Katnip Komix has the cat coming back! This glamorous Golden Age cartoon catgirl from Fox Features Syndicate runs the swinging Kit Kat Club where she was a torch singer. However, her firefighter friend George seems to get into plenty of trouble, so Pussy Katnip uses her special concoction Katnip Fizz to give herself super-strength and super-smarts to stop robbers and racketeers. Full color funny animal fun, and in color! You can download this at Drive Thru Comics, plus as part of the Cartoon Comics Collection Bundle.
Posted by Jer Alford at 11:16 PM 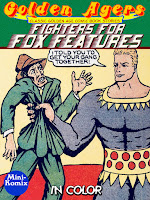 Golden Agers brings forth the Fighters For Fox Features! This publisher from the dawn of comic books created some of the world's greatest heroes. Starring: Jo-Jo, Stardust, Captain Kidd, Space Smith, Yank Wilson, Rocket Kelly, Dagar, Black Fury, Rex Dexter, Jungle Lil, Flick Falcon, and Sub Saunders! 100 Big Pages of legendary lore, and in color! You can download this at Drive Thru Comics, plus as part of the Golden Agers: Hero Collection.
Posted by Jer Alford at 12:56 AM

Burlesque Komix collects comics and artwork featuring vintage burlesk babes! Classic comics like Spotlight On Sally, Cuties, Katy Of The Chorus, and Glamour Girls, as well as a treasure trove of other "strips"! Showgirls, go-go dancers, milky models, and more shining stars of nightclubs and cocktail lounges! 100 Big Pages! You can download this now at Lulu and Drive Thru Comics, plus as part of the Sexy Comics Collection, as well as in print and digital at Indy Planet.
Posted by Jer Alford at 11:43 PM

Strange Swinging Sixties Supers resurrects Dracula, but as a superhero! This modern day descendant of the original Count is a scientist who makes a serum that allows him to change into a bat, along with enhanced strength, senses, and the ability to control bats. He uses his new powers to stop the maniacal Boris Eval from causing a nuclear war. After fleeing Transylvania, a cruise turns into a mission to confront the evil Admiral Maltemps from terrorizing the world with his weather dominator. Finally arriving in America, Dracula saves his shipmate B.B. which exposes his secret identity to her. She pays him back by giving him a new headquarters, but a run in with the supervillain Piper makes her more civil minded, and uses Dracula's formula to join him as the bodacious batgirl, Fleeta! This new dynamic duo set out to expose the evils of the world in this campy comic collection! Cover art by James Lyle and Joel Merritt. 100 Big Pages, and in color! You can get this in print now at Lulu.
Posted by Jer Alford at 2:55 PM