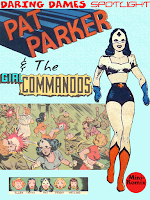 Daring Dames Spotlight shines on the patriotic Pat Parker, an army nurse during World War II who assumes the masked identity of War Nurse to help the allied forces defeat the Nazis. She later drops her alter-ego, and assembles an international female agents to go on special missions as the Girl Commandos. These women of war battle for freedom against the Axis. You can download this now at Lulu.com and Drive Thru Comics, as well as part of the Daring Dames Spotlight Bundle.
Posted by Jer Alford at 2:53 PM