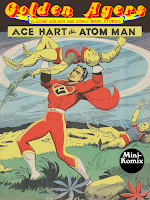 Golden Agers goes to England for their resident space bound super hero, Ace Hart-The Atom Man! The British ray gun-toting superman flies into action with his partner Val, and a harem of other hot lovelies as he battles alien invaders, ex-Nazis, moon maidens, and space pirates! The hit hero from Europe in a comic collection of some his most astounding adventures! You can download this now at Lulu and Drive Thru Comics, plus as part of the Golden Agers: Heroes Collection Bundle.
Posted by Jer Alford at 2:58 PM