Golden Agers: Clutches Of The Claw (in color) 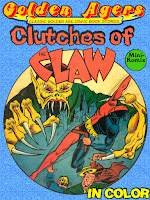 Golden Agers grabs you in Clutches Of The Claw. The first reoccurring supervillain from the dawn of comics, The Claw was a demonic alien that crashes on Earth and took over the Pacific island of Ricca. Bent on world domination, The Claw uses his powers of size-changing, super-strength, and hypnotism to create an army called the Clawites. Forming alliances with Hitler and the supervillainess Cobra Queen, The Claw sets forth on his crusade of evil. But, constant run-ins with heroes like Prof. Jerry Morris, The Ghost, Rocky X, and the original Daredevil keep foiling his plans! 100 Big Pages, and in color! You can download it now at Drive Thru Comics, or as part of the Golden Agers: Kaiju Collection Bundle.
Posted by Jer Alford at 12:28 AM