Posted by Jer Alford at 4:21 PM No comments:

Klassik Komix nicks nifty niches in Nostalgiarama! Tasty tidbits of public domain comics! Take a Magical Mystery Tour, seek Snappy Sammy Smoot, jive with Jet-Ace Logan, catch Captain Science, beat the Bugs, read Cornies Cereal, try the Vamp Dance, listen to The Secret Voice, and see Squeeeezerama in 5-D! 100 Big Pages of hodgepodge hysteria! You can get this in print through us, plus at Lulu.

Posted by Jer Alford at 2:33 PM No comments:

Klassik Komix checks out Chills And Thrills! Suspenseful stories from the Golden and Silver Age of comics! Read up on the prose stories of the Octopus Kings, and Black Cat. Sexy superheroines like Miss Masque, Acromaid, Glory Forbes, Commandette, and Black Orchid. Men of action like Red Rogue, and Shock Gibson. Plus, adventure with harem girls and island castaways! 100 Big Pages, and in color! You can order this now at Lulu.
Posted by Jer Alford at 2:13 PM No comments:

Klassik Komix readies its Battle Stations for military and space action! Blackhawk and his squadron take off for several adventures around the globe to protect world peace. Also included, the Space Rangers guard the galaxy from alien threats. 100 Big Pages, and in color! This is in print now from Lulu.
Posted by Jer Alford at 12:12 AM No comments: 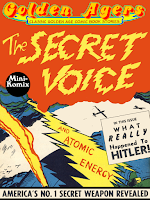 Golden Agers broadcasts The Secret Voice! During WWII, America had a secret weapon known only as "The Secret Voice". This "voice" relayed plans to the Allied Forces, and lead to the fall of the Axis Powers, as well as the death of Hitler himself! This psychedelic retelling of World War II is a farcical look at society during the times it was released, and a bizarre parody of early cartoon humor! You can download this now at Drive Thru Comics, as well as part of the Golden Agers: Humor Collection Bundle, plus in print and digital at Indy Planet.
Posted by Jer Alford at 5:55 PM No comments:

Octobriana is The First Russian Superheroine! Originally introduced as a European fanzine character, the time-traveler was brought into the world of Russian underground comics as a radioactive immortal with super strength that battles invading hordes, giant monsters, and the forces of oppression! This Silver Age siren is living proof that you don't come between an amazon and her cola! You can get this in print through us, plus at Lulu, as well as download at Drive Thru Comics, also as part of the Heroines Collection Bundle, as well as in print at Lulu, plus download and print at Indy Planet.

Posted by Jer Alford at 4:40 PM No comments:

Splatter Cinema shows 35 MM of gore! Slasher and horror films are brought out of the darkness and on to the big screen! Take a tour of the afterlife, employ blue collar zombies, Santa Claus goes on a slay ride, love Lovecraft's "The Thing In The Moonlight", test out the Whore Liquifier, get Street Trashed, and see a day in the life of Ed Gein! Psychotronic scares from the days of grindhouse! You can download this now at Drive Thru Comics, as well as digital and print at Indy Planet.
Posted by Jer Alford at 11:17 PM No comments:

Crack open the files of the secret agency known as S.C.O.R.E. with their top agent, Pussycat! The "Secret Council Of Ruthless Extroverts" recruit their curviest(but mostly clueless)spy, who was promoted from being a lowly secretary after they see her overwhelming allure over men. Pussycat slinks her way into the evil organization called L.U.S.T. by going undercover, either by stopping an enemy submarine, playing in the Olympics, disguised as a maid, or going into space! She also takes some time off to visit relatives, or becoming a superhero! One of the most voluptuous vixens from the Silver Age of comics shows off her amazing assets! Featuring material by Bill Ward, Bill Everett, Jim Mooney, and Wally Wood. You can download this now at Drive Thru Comics, as well as part of the Underground Comics Collection Bundle, plus in digital and printed format at Indy Planet.
Posted by Jer Alford at 11:22 PM No comments: