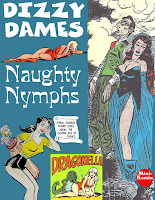 Daring Dames spins off in this sexy setup with Dizzy Dames! The funniest femme fatales come out of hiding from the Golden Age of Comics. There's the dragon-raised Dragonella, the sexy model Patsy Pinup, the hillbilly honey Long Sam, the heroic Wonder Broad, the Glamour Girl becomes a swimsuit model, Sky Gal runs into a caveman, peruse Ward's Women, Pokey Oakey meets some hot harem girls, Scorchy is a spicy spy, and sexy space girls abduct the hapless Henry Twigg. Everything from sci-fi, fantasy, superheroes, slice-of-life, and more in this comedic collection! Laugh it up at Drive Thru Comics and Lulu.com.
Posted by Jer Alford at 2:56 PM No comments: 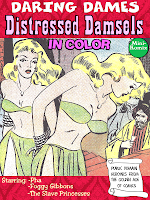 Even though the vaults of comics from the Golden Age are filled with heroines, there's an equal amount of "damsels in distress". Those sexy but still feisty females who have a knack for getting captured by the resident villains, only to be rescued by the dashing hero. Here are a trio of tales of four of those hot little hostages. There's the twin Slave Princesses who are put up for auction by evil slave traders, the jungle queen Pha who needs the aid of her savage lord Thun'da, and the plucky reporter Foggy Gibbons that ends up needing the help of her partner Ace Of The Newsreels. Real pulp fiction fun and adventure in this troika of titillating intrigue! You can find this color special at Drive Thru Comics and Lulu.
Posted by Jer Alford at 2:49 PM No comments: 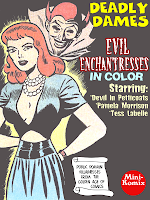 Some of the most evil of enchantresses work their wiles on the world to get what they want, no matter the cost. We're introduced to the Cold War secret agent, The Devil In Petticoats, who spies on gullible American men. Then, the hardnosed reporter Ray Hale crosses gets on the case of the sexy murder suspect, Pamela Morrison. Finally, the heroic Wonder Boy suspects the blonde bombshell and starlet Tess Labelle is involved in a Hollywood mystery. These seductive sirens want your money or your life, and don't care which one they get first! This new color special is ready to read at Drive Thru Comics.
Posted by Jer Alford at 2:44 PM No comments:

The Queens of the Congo swing back into action in this anthology of jungle thrills. Some of the original she-devils from the Golden Age of comics like Camilla, Ann from Thun'da, Giant Woman, Tiger Girl, and The Flame Goddess. These scantily-clad cuties will make you totally forget about Tarzan! It's available at Drive Thru Comics.
Posted by Jer Alford at 2:40 PM No comments: 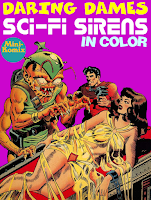 We're off to stars in Daring Dames: Sci-Fi Sirens(In Color). The Daring Dames warp back from the past with taunting tales of science-fiction adventure! Marga the Panther Woman is a cat-hybrid created by a mad scientist, Kenton of the Space Patrol smashes space vixens, a curvy cave girl greets two time travelers, a milky mermaid princess falls for a scuba-diver, post-apocalyptic angels in The Lost World, Auro: Lord of Jupiter gets involved in a love triangle, Space Rangers save lovely ladies, and a slave girl helps astronauts Escape On A Planetoid. Fun, fantasy, and far out romance in this sci-fi sensation! Catch it at Lulu and Drive Thru Comics.
Posted by Jer Alford at 2:34 PM No comments: 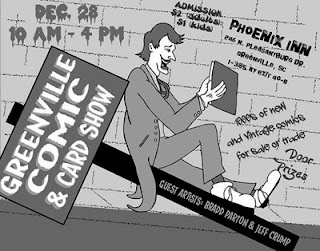 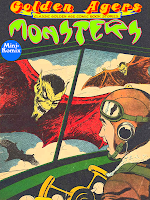 Golden Agers brings the fear with this classic collection of monster comics. We've got the giant kaiju known as The Gravimonster, the terrifying tale of The Painted Beast, the humorous case of I Was A Teenage Weird-Wolf, the alien menace in Love Trap, and bloodsucking freaks of The Vampire's Fate. Make way for this monster squad as they creep and crawl into your soul! You can catch this at Drive Thru Comics and Lulu.com.
Posted by Jer Alford at 12:15 AM No comments: 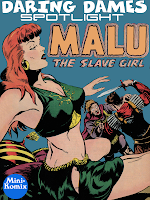 Travel through time with the buxom redhead Malu as she is a princess in the era of the Arabian Nights who is turned into a slave girl. Travelling from harem to harem, she travels with her true master Garth to reclaim her throne. Scantily-clad slavegirls and bellydancers make this a magic carpet ride you'll never forget! Pop your head in the harem for this for download and print at Drive Thru Comics as well as Indyplanet.
Posted by Jer Alford at 1:35 AM No comments: 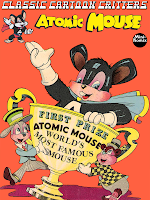 Classic Cartoon Critters carries on with the mightiest of mice, Atomic Mouse! Using special U-235 pills, a common mouse gains atomic superpowers to protect fellow mice from the flim-flamming farces of the nasty Professor Gato. This all-ages collection has him travelling through space, stopping Prof. Gato's schemes, and giving a kid his birthday wish. Fun-loving fans will go nuclear for this goodie from the Golden Age. You can get this at Drive Thru Comics and Lulu.com.
Posted by Jer Alford at 3:20 PM No comments: 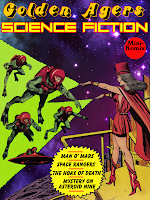 Golden Agers is our new digital series where we bring together some of the greatest stories in the history of comics. This special "Science Fiction" selection highlights some of the best in the genre. Follow the brave Jim Fanning as he tries to solve the Mystery Of Asteroid 9, the mighty Man O' Mars fights to liberate Earth from Martian invaders, discover lost civilizations with the Space Rangers, crime-fighter Lance Storm duels the evil Prof. Zarno during an alien invasion in The Hoax Of Death, the Boy Explorers take a trip to the moon, outer space sorceress Demona battles monsters, a galactic guardian gets A Vision Of Venus, Catman discovers the lost city of Atlantis, Blue Beetle rescues a space station from asteroids, Blast searches other worlds for Element X, Captain Valiant plots against space pirates, and The Swordsman of Sarin slashes his way on a hostile world to rescue the love of his life! Star treks and time travel are the house special in this colossal collection! You can download it at Drive Thru Comics and at Lulu.
Posted by Jer Alford at 1:18 AM No comments:

We have a table at the next Atlanta Comic Convention is set for Dec. 8 at the Marriott Century Center on 2000 Century Blvd., Atlanta, GA. 30345.
Posted by Jer Alford at 11:05 PM No comments: