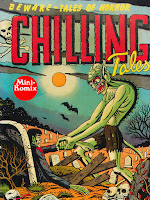 Chilling Tales brings you a barrage of gory Golden Age horror comics! Creepy classics collected like: The Torture Jar, Dance Macabre, The Obi Makes Jumbee, Demona, The Long Way Home, Frozen Fear, The Temple Of The Spider, The Ghosts' Revenge, Green Killer, Undertaker, The Vengeful Corpse, Eye Eye Sir, The Skull Scavenger, Kiss And Kill, The Hacker Is Back, Volcano Of Doom, The Haunted Murderer, Step Into My Empty Shroud, The Man Who Stole Eternity, Zombie Terror, The Fearless Vampire Killer, and Death Is My Love's Name! This is available digitally at Drive Thru Comics, and as part of the Monster Comics Collection.
Posted by Jer Alford at 4:04 PM 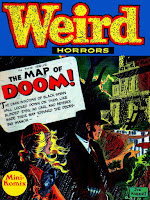 Weird Horrors is a collection of creepy comics from the Golden Age! Including: The Map Of Doom, Cat's Death, Vampire, I Chopped Her Head Off, The Strange Mr. Milque, Lure Of The Snake Goddess, Mirror Of Isis, Bridegroom Come Back, The Black Flight, Monsters Of The Deep, The Vampire Bones, She Stalks At Sundown, Thing In The Pool, Savage World, Painted Beast, Vampires Two, and Book Of Doom! You can download this at Drive Thru Comics, and as part of the Monster Comics Collection.
Posted by Jer Alford at 1:06 PM 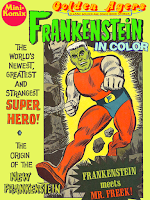 Golden Agers brings you the one and only Frankenstein, but as a superhero! After laying dormant in the long abandoned Castle Frankenstein for over a hundred years, the creature is awakened by a stray bolt of lightning. He puts on a mask to blend into the regular world, and takes on the secret identity of Frank Stone. After saving the life of an elderly millionaire, Frankenstein is rewarded by becoming his sole heir, and collects his entire fortune. Frankenstein then uses his supernatural strength to take on the criminal mastermind Mr. Freek and his colossal gorilla Bluto from taking over Metropole City. Sensational Saturday Morning action and excitement in this monstrous marvel of comic books! 100 Big Pages, and in color! You can get this in digital format at Drive Thru Comics, and as part of the Golden Agers: Heroes Collection.
Posted by Jer Alford at 2:43 PM 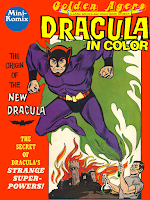 Golden Agers resurrects the lord of the vampires, Dracula, but as a superhero! This modern day descendant of the original Count is a scientist who makes a serum that gives him the power to change into a bat, along with enhanced strength, senses, and the ability to control bats. He uses his new powers to stop the maniacal Boris Eval from plunging the world into nuclear war. After fleeing Transylvania, a cruise turns into a mission to confront the evil Admiral Maltemps from terrorizing the globe with his fleet of zeppelins with the power to dominate the weather. Finally arriving in America, Dracula saves his shipmate B.B. from dying in an accident, which exposes his secret identity to her. She pays him back by giving him an abandoned bunker to use as his headquarters, but a run in with the supervillain Piper makes her more civil minded, and uses Dracula's formula to join him as the bodacious batgirl, Fleeta! This new dynamic duo set out to expose the evils of the world in this campy comic collection! 100 Big Pages, and in color! You can download this now at Drive Thru Comics, and as part of the Golden Agers: Heroes Collection.
Posted by Jer Alford at 2:38 PM 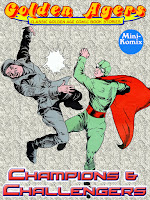 Golden Agers gets its game on with Champions And Challengers! Superheroes and action aces from the dawn of comics. Starring: Spy Smasher, Catman, Kitten, The Hood, Blackhawk, Mysta of the Moon, U.S. Jones, Plastic Man, Dr. Fung, and The Eye! You can download this now at Drive Thru Comics, or as part of the Golden Agers: Adventure Collection.
Posted by Jer Alford at 4:40 PM No comments:

Kooba Komix mixes together a collected concoction of Fantastic Features! Fox Features Syndicate comics from the Golden Age starring full-length tales of The Black Tarantula, plus Samson And Delilah. There's also two tales of Golden Knight, as well as Flick Falcon, Captain Kidd, and Stardust the Super Wizard! 100 Big Pages, and in color! This in print at Lulu, and in digital format at Drive Thru Comics, plus as part of the Kooba Komix Collection.
Posted by Jer Alford at 4:10 PM 1 comment:

Fawcett Publications produced some of the greatest Golden Age superheroes, so get a refresher course with the Fawcett Freedom Fighters! Starring the original Captain Marvel, Captain Marvel Jr., Mary Marvel, Spy Smasher, Ibis the Invincible, Mr. Scarlet, Pinky, Golden Arrow, Phantom Eagle, Nyoka the Jungle Girl, Captain Midnight, Bulletman, Bulletgirl, and Bulletdog! Say "Shazam" and summon the Secret Squadron for 100 Big Pages! You can download this now at Drive Thru Comics, or as part of the Hero Anthology Collection, plus in digital and print at Indy Planet.
Posted by Jer Alford at 5:07 PM 1 comment: 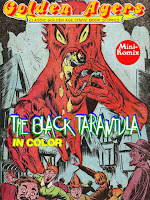 Golden Agers unravels the tangled web of The Black Tarantula! Count Rorret is a lord of the undead with the power to summon spirits and demons on a whim. He plots to transform the beautiful Princess Minnerville into his living dead bride while tricking her into thinking she'll be wed to her commoner suitor Leopold. What follows is a full-length feature of crafty creatures, creepy crawlers, and curious crafts! A gory horror story from the Golden Age of comics, and in color! You can download this now at Drive Thru Comics, or as part of the Golden Agers: Horror Collection.
Posted by Jer Alford at 11:51 PM 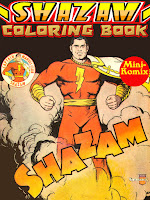 The ORIGINAL Captain Marvel in this Golden Age reprint of his official coloring book by Fawcett Publications in 1941! Billy Batson transforms into the World's Mightiest Mortal to save the Princess Beautia, stop the devious Dr. Sivana, mash monsters, get gangsters, and play pro football! This is now available for download at Drive Thru Comics, and as part of the Comic Art Collection Bundle.
Posted by Jer Alford at 4:02 PM No comments:

Kooba Komix: Welcome To The Jungle

Kooba Komix gets wild in Welcome To The Jungle! Fox Feature Syndicate jungle comics from the Golden Age! Starring Rulah: Jungle Goddess, Dorothy Lamour, Marga the Panther Woman, Jo-Jo, Safari Cary, Jungle Lil, and Zago: Jungle Prince! 100 Big Pages, and in color! This is now available in print at Lulu, and for download at Drive Thru Comics, plus as part of the Kooba Komix Collection.
Posted by Jer Alford at 3:00 PM 1 comment: