Atlas Archives cracks open the vault on the Bronze Age comics. Atlas/Seaboard was a company that broke away from Marvel Comics to become its own publisher. During their run, Atlas created several original superheroes. A reckless youth becomes The Destructor to avenge his father, Demon Hunter tracks down the forces of Hell, The Scorpion knocks off Neo-Nazis, The Grim Ghost makes a deal with the Devil to fight crime, and John Targitt becomes the vigilante Man-Stalker! 100 Big Pages, and in color! This is now available in print at Lulu, plus for download at Lulu.
Posted by Jer Alford at 2:09 PM No comments: 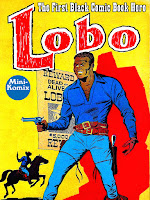 Lobo was the first black comic book hero! Premiering in 1965 by Dell Comics, Lobo is the premiere African-American comics character to receive their own title. During the Civil War, Lobo was a Union soldier, and blamed for a crime he didn't commit. He then becomes a wandering outlaw, traveling the old west, using his sharpshooting skills to fight injustice in the wild frontier. Great gunslinger action from the Silver Age! You can download this now at Lulu or Drive Thru Comics, as well as part of the Black Comics Matter bundle, plus in print and digital at Indy Planet.
Posted by Jer Alford at 2:31 PM 1 comment: