Guardians of the Golden Age: Legion of Super Spies

Guardians of the Golden Age looks into the Legion of Super Spies! Starring: Jill Trent-Science Sleuth, Ted Davey, Ace Malloy, The Shadow, Kismet-Man of Fate, Suicide Smith, Jet Fury, Kangaroo Man, and Drew Murdoch-The Ghost Gallery! 100 Big Pages of secret agents and dashing detectives! You can get this graphic novel through us, and in print by Lulu, plus online at Drive Thru Comics as well as part of the Guardians Of The Golden Age Collection.

Guardians of the Golden Age seeks out the most Uncanny Explorers! Dick Ashton searches for The Secret City, Catman and Kit fight The Phantom Mummy, Wambi the Jungle Boy tries to bring peace to the wild kingdom, Buck Johnson goes on a safari, the Purple Rider investigates the Evil Eclipse, Trader Jim tells some Jungle Tales, Argo looks for an undersea kingdom, Cap'n Jerry clashes with cannibals, and the Congo King rules the jungle! 100 Big Pages! You can get this paperback by through us, also at Lulu, plus online at Drive Thru Comics and as part of the Guardians Of The Golden Age Collection.

Guardians of the Golden Age teams together some Titanic Teens! Young heroes from the dawn of comics like Mary Marvel, Captain Marvel Jr., Tomboy, Golden Lad, T.N.T. Tom, Masterman, The Black Knight, Bobby O'Brien, Circus Girl, and the Chums of St. Albyns. 100 Big Pages of terrific teenagers! You can get this in print through us, also at Lulu, and online at Drive Thru Comics as well as part of the Guardians Of The Golden Age Collection. 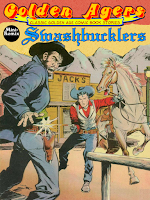 Golden Agers shows the heroic archetype of Swashbucklers! Starring the heroic highwayman Dick Turpin, the legendary Spartacus, the gunslinger Hawk, the pirate captain Hawk, the tremendous TNT Tom, the rash Radio Squad, the courageous Cap'n Jerry, the killing Kid Dixon, the sacrificial Suicide Smith, the terrific Trader Joe, the detective Drew Murdoch, the tough Terry Kane, the curious Kangaroo Man, the upholding Harbor Patrol, the deadly Death-Man of Angola, and the cosmic Captain Atom! High adventure and hyper heroics! You can download this now at Drive Thru Comics, plus as part of the Golden Agers: Adventure Collection Bundle.
Posted by Jer Alford at 4:23 PM No comments:

Premiering in Hell-Rider magazine from 1971 during the Bronze Age, The Butterfly was the very first African-American comic book superheroine! Marian Michaels leads a double-life not only as a hit Vegas nightclub singer, but as the masked maiden known as Butterfly. Aside from being a hand-to-hand combat expert, Butterfly also uses blinding light effects, suction gloves, and a jumping jet pack to fight the forces of evil! She clashes with the crafty Claw and his clan of costumed cat-men, plus the Grand Master along with the Brothers of the Crimson Cross! Written by Gary Friedrich; art by John Celardo, Mike Esposito, Rich Buckler, and Bill Everett. Also included are tales of other foxy mamas like Salimba the Jungle Goddess by Stephen Perry, Lady Satan by Al Hewetson and Ricardo Villamonte, plus Go-Go Girl and Disappointed Doll by Jack Kirby(the creator of Black Panther!). Fly off into action with the original black female superhero! This is available in print by us, as well as Lulu, plus in print and digitally at Indy Planet, also for download at Drive Thru Comics, and as part of the Black Comics Matter bundle.

Posted by Jer Alford at 5:57 PM No comments:

Win friends! Influence people! Get stupid! You can achieve all this with Stupid Komix! Satires, spoofs, and comic book parodies guaranteed to help you achieve your dreams of pure stupidity! Learn why Comics Is Wonderful, take off with Four-Flush Gordon, pure fun with Puncho Villa, dig Dragonella, see the Some-Thing from another world, Captain Marble flies again, bloodsucking 101 in V...for Vampire, Lil' Abernathy looks for love, Marvin Pain-Private Eye is on the case, The Mummy Walks(again), Superella gets help from her Super-Godmother, medieval mayhem with Prince Valuable, and Young Dr. Baloney stinks up soap operas! 100 Big Pages, and in color! You can get this in print now at Lulu.
Posted by Jer Alford at 12:47 PM No comments:

Space Comics brings back the classic space hero, Captain Valiant! From the British comic book series by Denis Gifford and Mick Anglo, Space Comics showcases Valiant of the Interplanetary Police Patrol, as well as galactic guardians Speedsmith and Space Pilot! 100 Big Pages of intergalactic adventure! This is available in paperback through us, as well as Lulu, plus in digital format at Drive Thru Comics, and as part of the Sci-Fi Comics Collection Bundle.

Posted by Jer Alford at 4:23 PM No comments: